The Bikeraft Guide – The Fickle Fjord

You are here:
Pirates of Bikerafting

Bikerafting Greenland story & photos by Huw Oliver. This story is one of one of the “Pirates of Packrafting” stories to be published in The Bikeraft Guide, a community multi-media project and book written and assembled by Steve “Doom” Fassbinder and Lizzy Scully.

Scottish multi-sport adventurers Huw Oliver and Annie Lloyd-Evans bring their packrafts and fatbikes on far-flung adventures around the world. In 2018, they bikerafted Greenland, floating their rafts and bikes 100km down one of the country’s longest fjords, after changing plans numerous times due to dangerous rivers and unrideable terrain.

In August 2018, Annie and I traveled to western Greenland, just a hundred kilometers or so north of the Arctic Circle and at the head of one of the world’s longest fjords. Though only in the country for 10 days, we were already on plan C; plans A and B having fallen victim to swift glacial rivers and unrideable, scrubby tundra trails. The objective still keeping the dwindling flame of our optimism alive was a fabled arctic desert valley: a tantalising access route to drier, higher tundra riding that might prevent us from looking entirely daft to have brought bikes to a continent with only one road.

When, months ago, we looked longingly at the valley on maps, satellite photos and the slim handful of photos we had been able to find, the synapses responsible for overly-ambitious adventures began to fire wildly. The only downside was that getting there meant a 100km+ paddle down and across the fjord.

It would be easy to assume that a long, flat water journey is a simple matter of patience and grinding out the miles. But, this was by far the most objectively dangerous section of any route we had travelled before. Tides, wind and cold arctic seawater were all factors that could quite easily overcome a packraft loaded with bikes and expedition gear, and we knew it.

We also knew that just a few years prior a German packrafter had disappeared without trace in the same fjord, leaving just a drifting boat. It’s presumed that strong winds and large quickly-appearing waves capsized him, and then separated him from his boat. Since then, other packrafting fatalities on flatwater where strong winds were involved have served to remind us of the importance of factoring it into safety precautions. Being almost entirely above the waterline, a packraft hull can be moved very quickly across the water’s surface and out of reach of a swimmer. 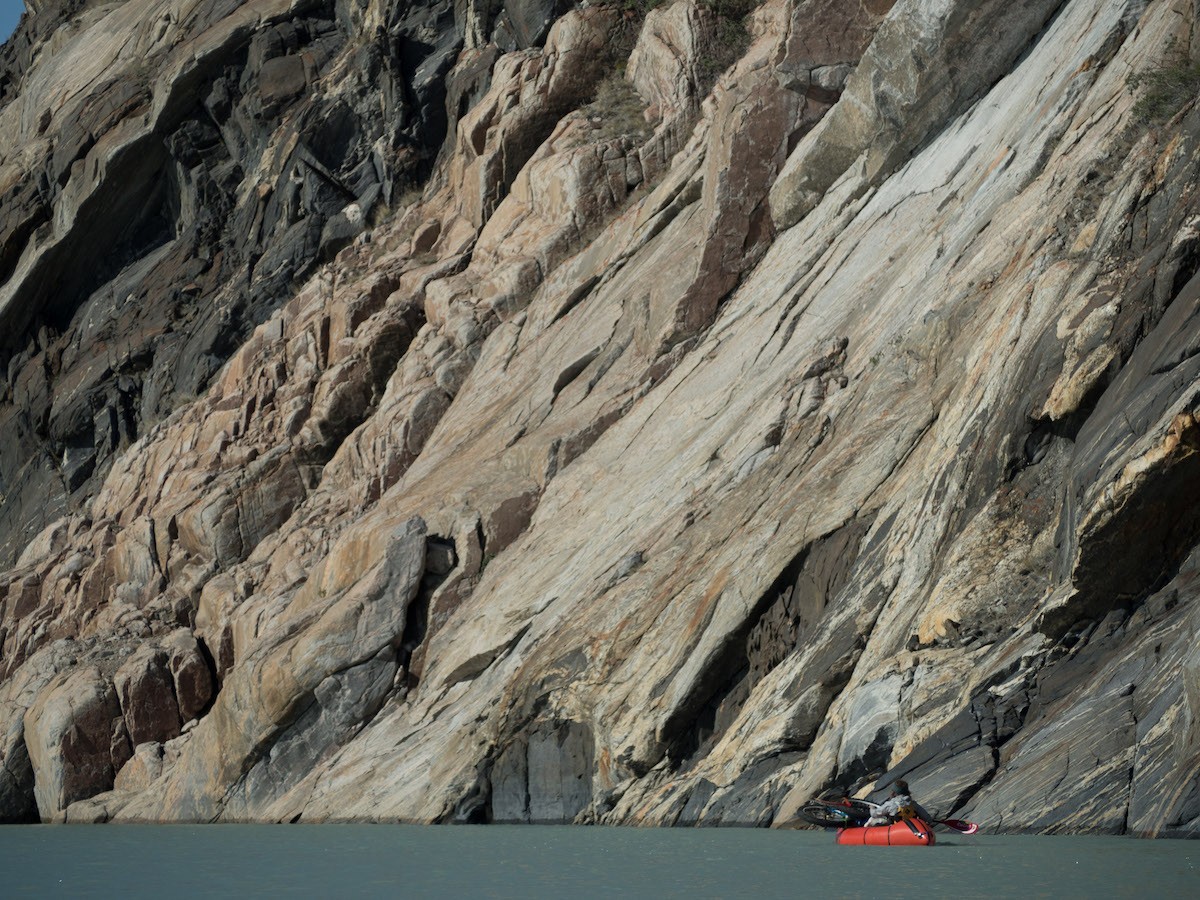 While our location was well over a hundred kilometres from the open coastline and its associated weather, violent katabatic winds of dense, chilled air often descend from the icecap to rush downhill toward the sea without being associated with incoming weather systems. Knowing this, we knew that our planning needed to be good for this leg, as well as our ability to pre-empt and react to changing conditions.

The first stretch on the water mirrored our apprehension that day: a dull, two-dimensional sky and sluggish grey water at the head of the fjord. As we packed and inflated the rafts beside the small harbour, Greenlanders watched us while loading their own boats to head down to the fjord to access hunting sites. We hugged the shore closely as we inched through the milky water, feeling silly to be playing it so cautiously in the benign conditions, and tempted to cut directly across inlets to save some precious distance on the long paddle ahead!

Midway through the afternoon, we got our first confirmation that the cautious approach was the correct one. A pounding offshore wind blew up in the space of ten minutes or so, pushing us inexorably to our left and away from shore. Annie called it and indicated she was heading in, and I followed as hard as I could. Despite being only forty or fifty meters from the rocky shore, it felt like it took forever.

Two days later, we found ourselves being blown down the fjord at twice our usual speed, a strong wind pushing us on and washing over the backs of the boats from time to time, keeping us gripped and constantly calculating our safety margin. For the previous 36 hours, we had been pinned down on a rocky outcrop by winds that were far too strong to paddle in at all. So, we resorted to digging into the sandy soil for drinking water with a found caribou antler, and waiting out the weather by picking blueberries and fishing.

“The landscape on either side of the fjord was much more arid than we expected, so we soon adjusted our plans to make sure we were carrying two days’ water, in case we got pinned down at a camp with no available water”. ~Annie Lloyd-Evans

The tide was another element that could either help or hinder us. Having photographed a tide table back in Kangerlussuaq, our daily routine was dominated by the ebb tide as well as the wind, as the flow was around 3 knots at its peak, and therefore too strong to try and paddle against the flood. On at least one day we rose with the early arctic dawn and paddled for the full length of the ebb, before sleeping and eating all afternoon during the flood. We then packed up our gear and set out into a calm evening, taking advantage of the second friendly tide of the day and only getting off the water when it got dark.

The elephant in the room was the fact that we needed to cross the fjord at some point, as our valley lay on the other side. The narrowest point was still some 5km across — nothing to a sea kayak, but at the speed of a heavily laden packraft it meant at least an hour of exposed paddling, even in perfect conditions. We decided to wait for a calm evening and cross over slack tide, when our observations had shown the air and sea tended to settle for several hours. Without a weather forecast to help us we had to rely on these observations and keep one eye on the clouds to keep us informed of any impending weather.

We pushed off into a breathless evening, sky and sea reflecting the same pastel aquamarine and lavender hues of the low arctic summer light. One half of my brain struggled to keep on track of timing, heading and to frantically monitor the surroundings for the slightest clue of disturbance in the air. I was horribly aware that we were committed now in a way that we hadn’t been before. We had seen firsthand the power that could be unleashed on the water in a short space of time, and the stillness of our surroundings only served to emphasize the scale of the place, and the insignificance of our tiny boats. The other half of my brain wanted to record every splash of the paddle in the water, the bobbing of a curious seal off to one side, and the light that seemed to be coming from within every surface around me.

Having completed the crossing, and suddenly wondering why we were ever so worried about it, 15 minutes later we were scrambling for a takeout as an unexpected wind picked up just as the sun set for the night. We were being allowed to continue it seemed, but not without a reminder that we were not in charge.

“The fjord was a beautiful place to be, but there was so much raw energy there, it was hard to relax at times on the water. At other times, it felt like you could hear a pin dropping a mile away” ~Annie

Having had to adjust our schedule already for the inclement wind, we faced another feature on the fjord that we hadn’t planned for. Tidal eddies are familiar to any sea paddler, but the one pumping out of the mouth of our valley on the ebb tide extended at least 3 kilometres back up the fjord — a monster compared to what we were used to! Even while riding the ebb tide we were forced to pause our progress, despite the main tidal flow being in our favour. Just another reminder that plans and timings need constant evaluation and adjustment in the backcountry.

When we packed our food for the whole journey, we had added 48 hours in to the fjord leg based on potential delays, and we ended up using them. We eventually climbed out of our boats at the mouth of the river we would follow inland, stiff-shouldered and with cold feet, but safe and sound. In the six days it had taken to get there we had been given repeated demonstrations that our caution and apprehension had been well-founded, and it’s a journey that I often think back to when making judgement calls on benign-seeming paddling journeys.

Overall, it was one of the most surreal, engaging and rewarding journeys that I’ve made; not without its highs and lows, and such an immersive experience that the memories remain intensely strong when I look back through photos of it. In total, we were out 16 days on the route, although we didn’t hurry the pace once we knew we were within a day or two of the end. Following that first 100km stretch down the fjord, the majority of the land-based travel was good riding: some of the best I’ve ever ridden, in fact. That section of the journey is the basis for ‘Boundless’, an essay which appeared on bikepacking.com and in the Bikepacking Journal Issue 1. Follow Huw on Instagram!